It the area of spine surgery, robotic technology similarly provides a new level of precision related to navigation within the internal components of the body. Software within the robotic system links with three-dimensional diagnostic images from MRI and C-arm fluoroscopy. While the human eye can differentiate among 256 shades of gray, the robotic software can differentiate between 65 million gray scales. Consequently, the robotic system uses this heightened precision to control the robotic arms, preventing instruments from coming into contact with any sensitive tissue around the nerves or spinal cord. 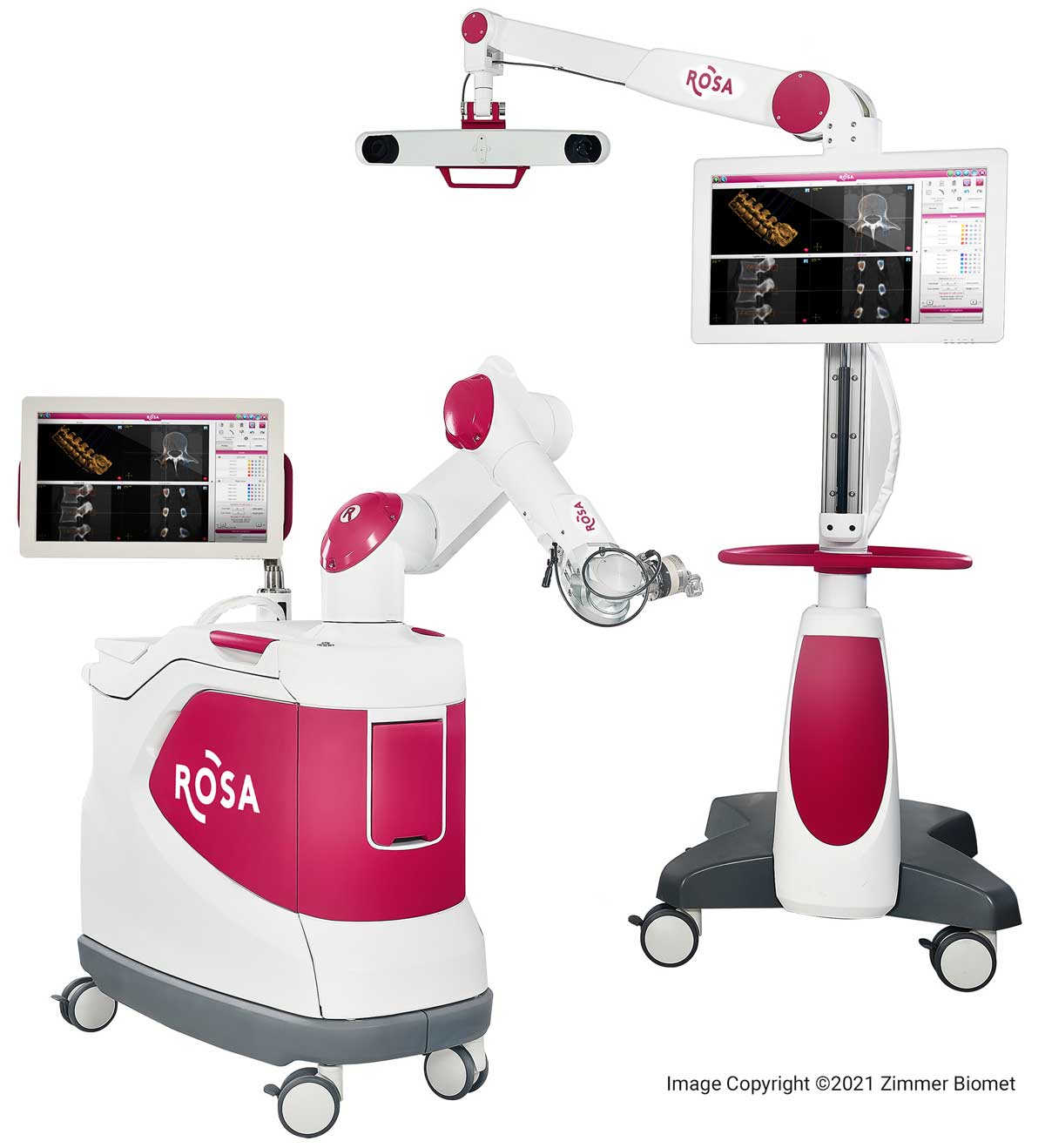 The Rosa Robotic Surgery System by Zimmer Biomet enables the spine surgeon to do advanced planning of a surgery the day before a surgery to map out the spine surgery, a fusion and the precise placement of any plates or screws needed in the surgery. Placement of fixation screws in particular can be mapped out in advance to show the optimal angle of screws that is than replicated by the robotic system during the surgery the next day.

Mapping out the surgery in advance speeds the spine surgery the next day, as the robotic arms are preset precisely to a quarter of a millimeter that then enable the spine surgeon to insert a tubular retractor the width of a large ball point pen through an incision at the optimal angle. The ROSA robot also controls the speed at which screws are installed, creating the ideal speed of rotation.

The ROSA robot was initially used in brain surgeries. The ROSA systems was later approved for spine surgery in the U.S. As of 2016, China had 11 ROSA systems in use. Hospitals in Germany, France, Spain and the US began installing the systems as they saw a huge patient benefit in the area of spine surgery.

Dr. Sanjay Jatana was one of the first spine surgeons in the State of Colorado to begin using the ROSA system for robotic surgery. “While it requires extensive training to use this new robotic technology, the benefits for the patient are huge,” says Dr. Jatana. “Because the surgery can be planned and mapped out in advance, surgery the next day goes much faster. This means that the patient is spending less time under anesthesia and less time under fluoroscopy. Because the ROSA robotic surgery system enables me to operate through a 1-inch long incision, rather than an open 3-inch incision, the patient has less blood loss, less tissue disruption and less pain as they go through rehab and therapy. Many patients with robotic surgery go home later the same day rather than spending days in the hospital. Consequently, they are typically back to activity much faster than with traditional spine surgery.”

Dr. Jatana emphasizes that the spine surgeon is still doing the surgery, not a robot. “The robotic system is simply performing the surgery I mapped out,” he explains. “The ROSA robot is simply adding more precision than what a human is able to provide.”